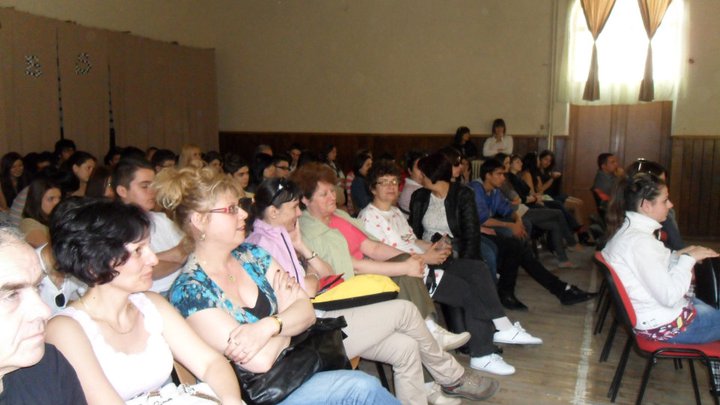 The event took place on 1st of March 2011, at 15:00PM, in the Ministry of Administration and Interns Cultural Centre. Students from 10 high schools from Bucharest, mixed together the white and the red wire, for tolerance, for the joy of becoming friends, beyond the differences between them, beyond their ethnicity , beyond their musical and sport preferences, beyond their religious identity, beyond any cultural group they are belonging , and offered the Spring Symbol of Tolerance. Every invited highschool participated with a group of teenagers, identified through ethnicity , musical preferences, sport preferences, or any other characteristic which made him attend any cultural group. Students , wearing the specific outfit for their group, offered the “Symbol” of tolerance, materialized through dance, music, scenaries about tolerance, and bring with them a white and red thread for mixing with the others, as a covenant of tolerance and respect for diversity.

The show was offered by N.C. “Gh. Lazar”,Theoretical School “J.Monet, “Mihai Viteazul, N.C., ” Cervantes” Bilingval N.C.,” I.L.Caragiale, N.C. “Spiru Haret” N.C.,” O.Onicescu” N.C., “I.Creang? N.C., “Gh. ? incai” N.C., “I.V.Socolescu” highschool, was a real high- class success, a very artistic moment, and the proposed objectives by the organisers – to promote tolerance and respect for cultural diversity, and for creating a context in which tennagers from different cultural groups, and know each other and socialize – were realised.